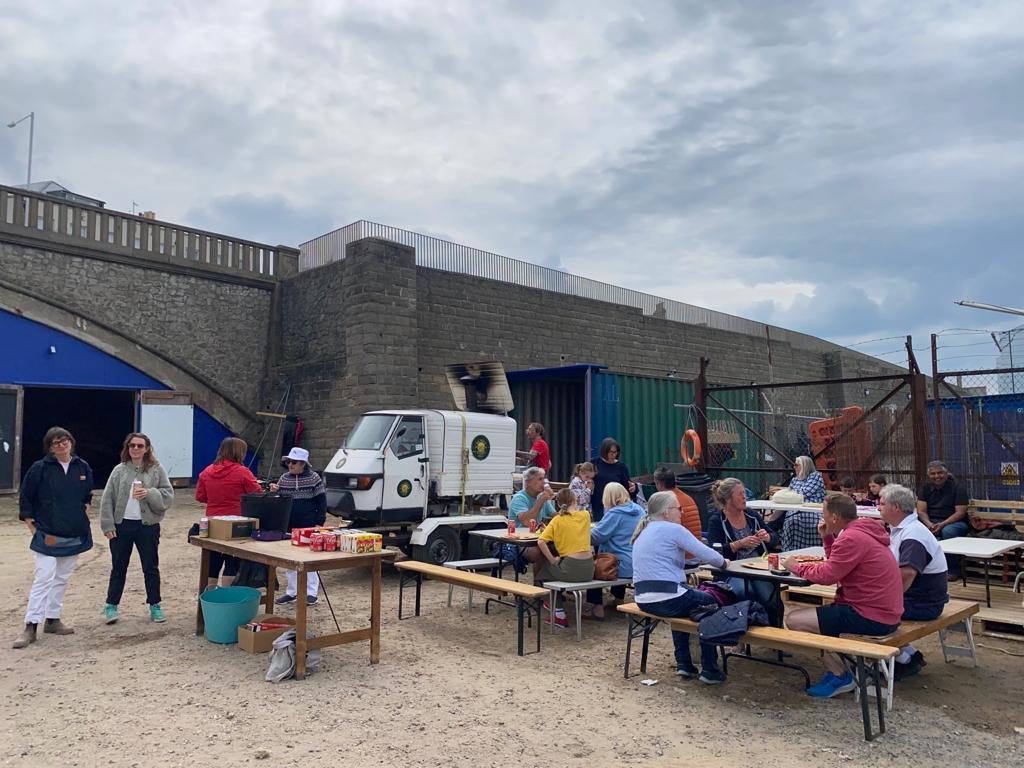 With the promise of low winds and a big family bank holiday, you can never predict how many boats you'll have on the water. We were thrilled to count 12 sails with a total of 25 sailors out on our Margate sea, let alone those working in the yard setting up for pizza and tinkering with boats back in the yard. The wind was a mere whisper at 6/7mph with a strong spring tide; the sailors had a tactical race ahead of them. The failing wind did nothing to lower the high spirits of the team as everyone was lured into the yard with smell of hot pizza and sound of opening beer cans.

Catching up in Commodore's Corner after the race, the sailors' views of the day's racing were gathered. Here are some quotes and overheard snippets:

Tony in a Lazer 2000, "What happened to the wind? Where did it go? Is it coming back for tomorrow? We managed to get back in some didn't!" said with huge smile.

Don in an RS Vareo, "Challenging conditions resulted in lots of holes in the wind plus a strong tide, all of which you can use to your advantage."

Graham in a National 18, "It was lovely sailing with my son and granddaughter, three generations in one boat. Perfect. My granddaughter on the wire and kite: it can't get much better than that."

Lawrence, crew, "After the first race Don shouted out, "Another race?", to which my dad replied straight away, "YES!""

Lola, crew, "We won! it was ace going on the trapeze."

Jacob in the club Lazer 2000 "Not enough wind, I had to paddle in, hanging off the front of my boat."

Dave in a Lazer 2000, "I was sailing with super crew Adem! It was an interesting start to the second race, we completely stalled, had no rights and nowhere to go. We were right on the line, ready to fly. It should have been a good start for us. It was very nice to be ahead of Antony in the Bahia, it's good to be ahead of any boat that Antony is in. That's my goal for the season: beating Antony. The challenge has been laid down!" Dave beams whilst sat next to Antony. We look forward to how this pans out.

Adem, crew, "It was lovely to finally be on the water. It's my first time as crew in a very long time. I'm hoping to learn to helm this season and become a sailor. I like the sound of that. Yeeha!"

Antony in the club Bahia, "Having limped around the course in a club Bahia, I have renewed motivation to get my Osprey back on the waterand beat Dave.

Dean sailing a club Vision, "Best beer in 3 years, handed to me, ice cold whilst I was washing my boat down, what more can I say?"

Winter as crew, "It was wicked to sail with Dean, he's a super cool new member and great fun."

Jeremy in club Vision, " Rig your kite properly on the shore, not on the water, ooops".

Kevin in a Vision, "The water was bloody coldwhy did I wear a shorty?"

Heather race officer "It was a spicy start for second race. It looked like a traffic jam on the start line with all the hustle and bustle of Piccadilly Circus. Everyone was digging deep looking for their hankies, anything to catch some extra wind, as they hoped for a slither of water to reveal itself

Chris (after a morning out with the RNLI), "God there is a lot of boats out!" said with a huge smile.

Beadie (whilst serving drinks), "This makes me think we need a BBQ, I want hot spitting bacon butties on a Sunday, a coffee maker and a milk frother and I'll never leave the yard again. I mean we should have a get together every month, right?"

Mia Papa Kitchen (making pizzas with his daughter), "I'm having an absolute ball making pizzas. It's really nice to see the club doing so well, I'm proud to be part of it."

Everyone had a fantastic time. Thanks to everyone at MYC for another brilliant day!